March 11, 2009
More than once, I've found myself cycling at 4:00am, though it is an unaccustomed time for me to be part way through a ride. My first ride through the night was in April of 2004 on the San Francisco Randonneurs Fleche. From that time until PBP 2007, I had ridden through the night only five other times. Though cold temperatures were often a prominent feature of the weather, none of those occasions included rain, and in each of those other experiences I had the luxury of having at least one and often several good friends with me. This situation on PBP, alone in a crowd, riding into and out of several new days put me far enough out of context that I really wasn't thinking so much what time of day it was, or when daybreak might come. Instead, I focused on the moment at hand.

With the passing of many kilometers the tightness of the various packs and the sheer number of other riders had lessened. To be sure, there were always other riders to see ahead and behind, but no longer were we riding two or three abreast. The lighting on my bike stood out even more at this point as I would pass or be passed by other ridrs, and especially so when I used both of the E6 headlights I had mounted. I had heard stories from previous editions of PBP where a rider with especially good lights would often attract a number of other riders, sharing the better visibility. I didn't see this happening nearby me, and I know it was the rain. The rain had all but killed conversations as each rider seemed hyper-focused on just turning the pedals.

My involvement in long distance riding began with the Davis Double Century in 2000. I started well before dawn because the day would be hot, and going the full 200 miles was an uncertain thing. I've done that ride nine times now and on each one, dawn was a significant memory. Davis is in California's Central Valley, and the early morning May sky nearly always features a view of the mountains in the Sierra, backlit by the rising sun. So often the dawn would be a pronounced transition from black, to dark blue, to blue. The first dawn on PBP was nothing like that. There was dark, then less dark, then gloom. I do recall the moment of transition from less dark to gloom though. The terrain was undulating, and I rolled down into a ravine like portion of the landscape and riding up out of it it felt brighter, I could see further ahead, I could see more riders, and see both riders and terrain more distinctly. If nothing else, then, the gloom afforded me the chance to indulge in a favorite pastime while riding long distances: gawk at bicycles and bike gear (something I did before the ride start and again after the finish).

The remaining kilometers ahead before reaching the first control were dwindling now, and though I could now easily see my odometer I remained unsure of how long it might take and how far it really was until I reached Villaines-la-Juhel. Still eager to talk to someone, anyone, it had been hours since I had seen an American rider. On a series of hills, two French riders approached and passed me, both riding Alex Singer bicycles. These are bicycles that I very much admire and I really wanted to converse with their riders. I began by speaking English. "Very nice bicycles!" In return, a very gruff "En français!" with no hint of a "s'il vous plaît" at all. The tone carried the message and slightly stunned, I drifted back. Drifting back was easy at this point as I was tired and felt these riders were a bit stronger than I was and had the advantage of each other's company (though they didn't seem to take full advantage of that by either conversing or by drafting). I mulled it over and struggled to form the most basic of French sentences that would convey that I really liked their bicycles and wanted to talk to them about it. Rather than take offense, I decided to just smile and try again. Increasing speed and catching up to these riders once more, I began "Alex Singer trey ..." I quit at the first harumph. I could have been both stunned and insulted that the rider simply would not look at me or help further a conversation. Instead I did the best thing I could at the moment. On the next hill I dropped those riders and never looked back. 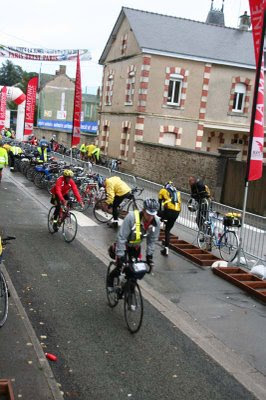 I knew better than to assume that this experience summed up the French. These two riders were in stark contrast to the many villagers and townspeople along the route who cheered on all the riders with a "bon courage" or "bon route", and offered coffee or water, even going so far as to take riders into their homes and feed them. Nevertheless, I made good use of the surge provided by this exchange and soon reached the control. Aha! This was where all the riders had gone. The place seemed mobbed as I first found the long narrow street where ranks of bicycles were parked. It seemed I had to ride forever to find the open racks, but once there I could see many more racks left open for what must be a well expected glut of riders. I rode to the far end of the full racks and then a bit further so I could leave my bike leaning against the railing out of the way. I didn't really trust leaving a wheel in the wooden rack, fearing it would tip over, making a taco of the wheel. Boy, it felt good to get off the bike and walk back to the check-in area where my brevet booklet would get it's first stamp. After getting my stamp and having my card swiped I wandered around taking care of a few things, including scouting out some food and a hot drink. In doing so, I ran into Ken Shoemaker and Theresa Lynch, two riders from back home in California. I also ran into Tim Houck, another rider from back home. By this time though I felt I had spent too much time at the control and should be going and it seemed these riders had just arrived. I made the long walk back to my bike and suited up to leave (that is me in the photo in the yellow jersey, with my back to the photographer, and my bike is beneath the red banner/flag on the right. I think that is Gregg Bleakney I'm talking to.)

Leaving the control I ran into Mark Thomas and Peter McKay, both from Washington, passing them as we left town, and moments later Tim passed me, riding strong enough that I knew I had no chance of keeping up. The energy I had regained resting in the control seemed to flow away and Mark and Peter rolled past me. I wasn't up to the opportunity of riding with people I knew, but the fact of daylight made up for that. Now I was able to see more of all the riders and the countryside all around. Provided of course that the rain would hold off. Ah, but that too didn't hold up after the break at the control.

Ciclista said…
It's a shame that those two (very rude) French riders weren't willing to engage you when you really needed to. You definitely took the high road and good on you for that. But in '07, the U.S., and Bush Administration in particular, were not viewed favorably to put it mildly. And, you didn't even speak French. Mon Dieu! You can understand, oui?

rob hawks said…
While I too think those riders didn't need to be so dismissive, I'm going to give them a little bit of a pass. Most everyone was not happy at this point in the ride. Plus, they were the exception. So many other French citizens that I met were wonderful. On my own part, as I mentioned I was not well prepared language wise, a situation I plan to address before 2011.

As for cool bikes, check out the gallery here: http://picasaweb.google.com/rob.hawks/BikesOfParisAndParisBrestParis#

I saw many bikes just like these on the ride.