August 30, 2009
One of the bike clubs I belong to, the Grizzly Peak Cyclists, is made up of many riders that simply enjoy food and will plan routes that include, not one, not even just two but sometimes three bakeries. On these rides, I'm reminded of a snippet of a scene from a Three Stooges short subject, called 'False Alarms', where the title of this entry is spoken by one of the characters.

Twenty+ riders attended the TM and M paced versions of the "Santa Cruz Mountains" ride on Sunday, Aug. 23. The route begins at the Park and Ride on Page Mill just off of I-280 with an 8+ mile climb of Page Mill up to Skyline, followed by a twisty descent down Alpine Road. A stop in Pescadero at mile 28 might seem too early on a 100+ mile ride, but the lure of fresh baked artichoke bread at Arcangeli Grocery proves too great to overcome. 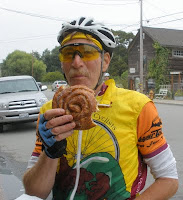 From Pescadero we rode past Butano State Park on the way to Gazos Creek and Highway One. The next stop is in Davenport at mile 50, where we paused briefly before attempting the climb up Bonny Doon and Ice Cream Grade (the TM route took the coastal route into Santa Cruz). Pescadero and the coast along CA 1 always seem to be living life under the marine layer of fog, but climbing up through the canyon on lower Bonny Doon (a pivotal spot for Levi on this year's Tour of California) the sun always reappears right there on these rides, just in time to add more heat to riders as they clear the trees.

Ice Cream Grade (how can you not like riding a road with this name)isn't all work but does include some climbing, as does Empire Grade until the long fast run into Santa Cruz. Traffic 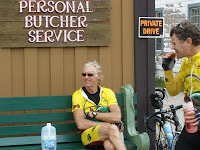 in Downtown Santa Cruz was heavy as usual at that early afternoon hour, however travel through the town was not hectic. Following a climb up Granite Creek and an all too short downhill, we crossed over CA 17 and arrived at Cafe Carlos finding the TM group, which started an hour ahead of the M paced group, finishing up their lunch. Cafe Carlos was a bit understaffed for 15+ hungry riders at 2:45pm but the one waiter rushed to provide us all with food while cashing out the TM group as they left. Cafe Carlos is not to Mexican food as the Arcangeli is to baked bread, but fresh artichoke bread still warm upon purchase is a very high standard. However, the patio setting at Cafe Carlos was perfect with lots of space for our bikes to be kept in sight as we dug into our meals. Despite the food not being spectacular (NB: I was the first one finished and the portion was not tiny), I'd still be perfectly happy to stop there for lunch on a bike ride any time. 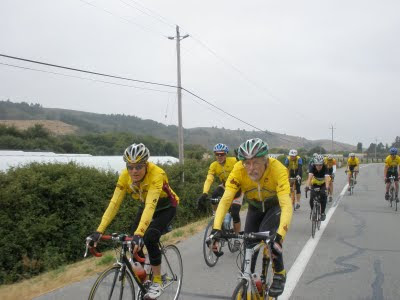 Post lunch, we began with a modest climb on our way to Mt. Charlie, with it's driveway sized road width, pothole research and development style pavement and twisty, turny meandering path up the mountain, alternatingly punctuated with steep and less steep sections. On the 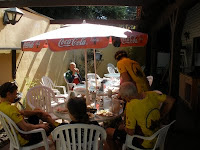 final stretch along Skyline the M group began to overtake some of the TM group. The run down Page Mill was a blast as always, with the 8 mile descent over in a blink.