November 04, 2009
California and nearly every other State ended Daylight Savings Time and reverted to Standard time this past weekend. My first chance to be affected by this change came on my commute home from work on Monday. Most of my route is along Bike Boulevards in Emeryville, or on bike or multi-use paths through Berkeley, then along the Bay Trail all the way up to Richmond. On Monday evening, it struck me that by far, most of the riders I saw that evening after the sun had set, had nothing in the way of lighting. I could not believe that so many people has simply forgotten about the time change. I thought I recalled passing ten riders, two of which had any kind of lighting.

Leaving more or less on time in the morning on Tuesday, I had nearly full daylight for my ride which I really appreciated. On the way home, I left after sunset but still somewhat within civil twilight. A mile or two into the ride and it was dark and all that time, lights were more than just a good idea. Again, I encountered riders with no lights at all, so I began to count them. By the end of my ride, ten out of the fourteen riders I passed had no lighting whatsoever and were riding in complete darkness. Of the four with lights, two had those maddening blinking front lights which strike me as being totally useless for seeing your own way, and less than adequate for letting others know where you are (with the light blinking it is difficult at best to judge the distance to the light source). Two riders had useful lighting. Though my route takes me past several places where homeless people live nearby, and also near locations where immigrants wait in hopes of getting day labor, none of the riders I saw were under privileged, under-employed or someone who had fallen through the social safety net.

Of the ten riders I passed with no lights, the last two were worth remarking upon. One fellow thought it worthwhile to yell at me. It is difficult at best to understand what someone passing you in the opposite direction is saying but it struck me that this guy thought I was doing something wrong. The last guy with no lights felt it very much worth his effort to give the stink-eye to the motorist who had quite properly stopped at a stop sign, quite properly signaled his intention to turn right, and was looking at the traffic from all directions before proceeding. WTF?! 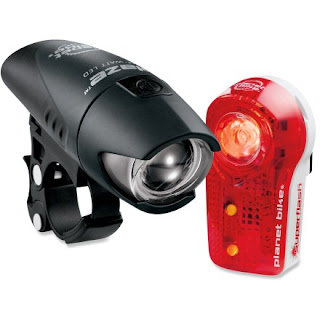 I'm wondering why more people don't plunk the money down for even minimal lights. For < $50 you can buy a descent set of small, light, useful lights at REI. Hell, REI will mail them to you if you can't make it to one of their stores, and no doubt dozens of other retailers would do the same. Planet Bike is not the only company making better than adequate bike lighting either. Check out Cateye too, for example. Great company, great customer service. $50 is half of what my deductible was for a visit to the ER last month (for an issue unrelated to cycling), plus the trip to the store to buy the lights took me far less time than the eight hours I spent waiting for all the various treatment I got for that ER visit. On the other side of the coin, if you are a gadget freak, then where have you been? Run wild here. There are tons of lighting systems out there, some that are so bright they'll melt the bumpers of the car stopped at the stop sign ahead of you.

Unless they are all doing it behind my back, no one has been calling a a doofus or dork, or even a dweeb for having lights on my bike at night, or for carrying them around during the daylight. But then, even if they did call me names, wouldn't this say more about them than me?

So you run and you run to catch up with the sun but it's sinking
Racing around to come up behind you again.
The sun is the same in a relative way but you're older,
Shorter of breath and one day closer to death.

Unknown said…
On a very similar ride (north from Emeryville) I almost ran head on into a cyclist without lights, reflective gear and wearing dark clothes. I don't see things getting better as the week has progressed. It's actually safer on the streets with cars than on bike/multiuser trails w my HID Niterider system. I've had to slow down on the dark stretches.

I guess they have a sense of being invulnerable, or are they brainless?

Ciclista said…
I almost ran over a rider with dark clothes and not a stitch of reflective cloth or even a rear light last night. No lighting at all. I was dumbfounded because it didn't appear to me that he was caught out late and returning from work which might happen to any of us. He looked to me like he was out on a training ride. I mean not even a silly rear blinking light? Come on, man! This was no teenager, either.
November 5, 2009 at 7:10 PM

Sterling Hada said…
RE: The bikers with blinkies and the idiot with no lights who yelled at you.

Just another indication of the self-absorption that these bozos wallow in. No willingness to take on responsibility for themselves. The onus for safety is on everyone else, fellow cyclists and motorists alike. I wouldn't be surprised if, given an accident, they felt outraged enough file a lawsuit, though the fault was clearly theirs.