The fog does not have feet 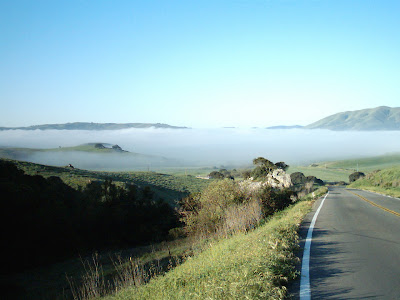 My memory of fog draws mostly on the years spent in the midwest. That memory is strongest when recalling fog that moved and changed with the same speed as flowers following the path of the sun across the day. That memory coincides with the fog of Carl Sandburg which moves stealthily, gracefully as if on cat feet. When I was 10, the Fourth of July involved a display of fireworks held in the field across the street and the event had two parts: the display in the evening of the 4th, followed the next morning by the search through the field for any of the unspent firework fragments that might rain down on the field. We would collect those fragments and then Conrad's dad would light them in the driveway as we watched and waited for something dramatic.

One year on that morning after, a fog thicker than I'd ever seen before covered the field. We could hear the voices of all the other seekers in the field, but we could not see more than 3 feet in any direction. Find one fragment and you would likely find more, so when I finally spotted a piece I dropped to my knees to look through the grass more closely and in doing so found that the fog hung in the air about a foot off the ground. Putting my head sideways to the ground I could see only the feet of all the other kids searching the field. By then I had given up searching the ground and instead followed the progress of the fog as it ever so slowly rose higher off the ground, first to the point where only shins and feet could be seen, then when disembodied legs ran beneath it. By lunchtime the magic and the fog were gone.

Moving to the Bay Area in August of 1992, I was expecting something more to do with fog, knowing that San Francisco has some frequent experience with it. It took me a short bit to realize that the daily cloud cover was the Bay Area's most common form of fog, and I was surprised by the clockwork timing it followed day after day, arriving around 7pm each evening as a tube of fog that would gently collide with the Berkeley Hills, then spread out to fill in all the gaps, and finally burning off at about 10:37am the next morning, just in time for the sun to filter through the tree branches outside my office window with the leaves acting as the aperture for a pinhole camera and project images on the office wall. My supervisor at the time told me about camping at Point Reyes and dealing with a completely different kind of fog, one he described as 'howling'. The fog I knew up till then just didn't howl. 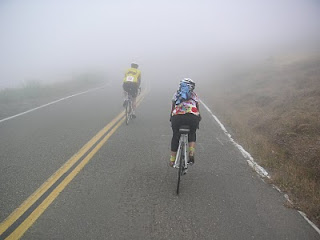 With a lot more years worth of experience with Bay Area fog, I've come to recognize the annual and daily patterns. Fog is more common here on a daily basis in the traditionally understood months of summer, then is less frequent during the Bay Area's version of summer which arrives in September and stays sometimes through October. A summer time ride in Marin county, particularly on Mt. Tam often includes healthy doses of fog. One time a few years back I had the luxury of not one but two rides up Mt. Tam within a week of each other. Both times, the timing was the same as I rode up from Alpine Dam where I'd climb into the fog. The fog would get denser as I rode higher. Eventually, the landscape would be dominated by redwoods, trees that are expert in using fog to it's advantage and largely only source of water during the summer. The redwood trees would collect the moisture from the fog and finally cause localized rain. Exactly 20 pedal strokes from the intersection of Bolinas/Fairfax road and Ridgecrest I rode through a small shower, with rivulets of rainwater streaming down the roadway. Earlier this year, a report was circulated that indicated that each year, the amount of coastal fog was decreasing, threatening the health of coastal redwoods with one more possible effect of climate change. As this particular summer wore on though, it seems that the coastal redwoods would get a one year reprive.

September has morphed into October now, and yet the Bay Area summer has never really taken hold. Fog still has the upper hand and returned a day ago after a short heat spell. When I can get a good night's sleep the night before, I leave the house a little earlier and ride the long way to work. Before the sunrise had slipped later in the morning I did get that good night's sleep and I did that longer ride to work, climbing up Spruce, taking a hard right on to Grizzly Peak Boulevard and headed toward the peak that lends it's name to the road. Before the route leaves the residential portion, I was up into the fog, fog that was as heavy and thick as it gets. All visual input turned grey and indistinct. I recall passing by Centennial Drive and becoming lost in thought, only becoming aware again as I was heading downhill on Claremont. Missing was direct memory of at least a mile of uphill climbing and an equal length segment of some pretty fast and uneven downhill. The 'Wait, how did I get here', totally stunned feeling was profound. Perhaps fog, like the rest of nature, abhors a vacuum and addressed that space between my ears for the duration of those two morning miles. 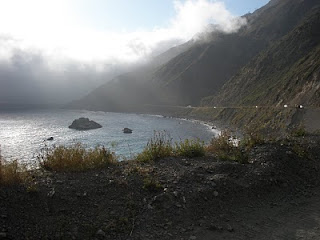 Down the coast in Santa Cruz, fog is no less of a reality and Summer, true and local versions, has been dominated by it. The September 4th Santa Cruz Randonneurs Monterey Bay 400km gave riders three chances to ride through the fog: morning, afternoon, and late evening. I've always been a rider quick to be covered in perspiration with little effort involved, so much so that I can create little weather systems in the space between my eyes, and my eye glasses. When there is fog outside as well as inside, I'm quickly blinded. On the return from Marina to the finish in Aptos, as we passed by Elkhorn with the slough off to the east, I was loosing more and more visual input. Three or four times I needed to stop and wipe my glasses with a bandanna I kept packed away for just this purpose. Without those stops, perhaps I would have finished under 18 hours, but I admit the rest it provided was welcome.

The terrain on that 400km route didn't provide the opportunity for one of the best fog related experiences I can think of though. Riding up into the hills and mountains in fog is sometimes comforting and eases the work of climbing if you can't see how little progress you are making. That is one of fog's bonuses but the true pay off for me is that moment of riding up and then out of the fog into brilliant sunshine. The summit of Mt. Tam offers this, as does the summits on Diablo and Hamilton, the other major peaks in the Bay Area. On a summertime ride up Mt. Tam once, this played out perfectly. Only the summit itself was free of the fog and a 360 degree view provided the glowing white of the fog layer as a floor contrasted for the most part by the blue sky above, and only interupted on the distant horizon where Mt. Hamilton and the Santa Cruz Mountains poked up in the south, and Diablo poked out to the east. The summit parking lot was deserted save for two cars, and one couple dancing in the open lot in the sunshine, she leading him and showing the moves he should make.

It has been some time since my last posting, and to be sure I've been on the bike a great deal, but this blog had been neglected. I was startled out of that blog writing fog with this message today: "Lets get with it, time to get beyond, 'Beyond 449 KM'. That was some nice writing but it was also some months ago." Paul, I hope this begins to pay off the tab I had been running of late. 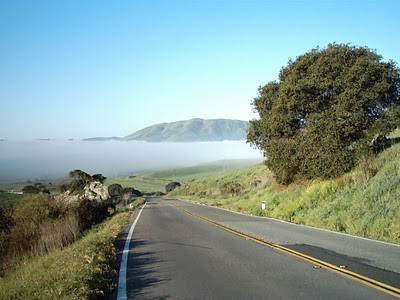