The paceline is diminished 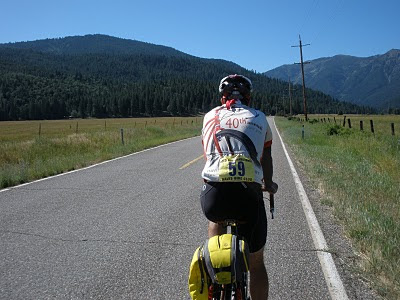 There is a hook that catches us all, and pulls us into randonneuring. It isn't just being on the bike. There are many things that pull me toward riding brevets, and there are many things that have delivered rewards for having joined the paceline. I certainly love pushing myself to complete longer distances, or to overcome a headwind, or to defeat a hilly course in a time I only dreamed of a year or more ago. Of all these things, however, the biggest draw, the surest hook, is the camaraderie I've found between the start and finish controls.

On the 2009 Davis Gold Rush Randonnee, I had been riding alone for a bit more than 50 miles. The water stop at mile 50 was busy in a way that the road leading to it had not been. I wondered where all the riders had been and how it worked that I couldn't gain on them and they could not gain on me. I left the water stop alone and in just a mile or two noticed a rattle that was more than annoying. After fixing a problem that verged on but was not entirely cosmetic (loose mud flap on my fender) a group of riders passed me as I mounted my bike. 'Hey, Rob!' It was Don Mitchell, whom I had met through previous San Francisco Randonneur brevets. I pushed to catch him and we settled into a pace agreeable to both.

Don and I decided to see how far we could go riding together and it took very little discussion. Hearing back from others today, I found my experience was not unique. Don was upbeat, friendly, basically a sunny guy to every rider I've found who spent time on the road with him. The timing on this ride was perfect. Don had passed me just as the sun was setting. Riding through the night with company was the perfect development and Don had ridden much of this leg before and shared the knowledge of what was to come ahead. We tackled Yankee Hill and the Jarbo Gap after leaving the Central Valley and reached the Tobin control as a team. As the sun finally rose we left Tobin headed for Indian Valley and the next control. On the climb up it was becoming clearer that my energy was fading and Don was finding his legs. He kept his pace down so that we reached Taylorsville together and shared a breakfast.

On that ride and on others later when we'd find our selves in the same group, we would talk bikes, and talk bike rides, and talk about future bike events. We just never got to the point of exhausting the bike topic. Today, finding out about his passing and through that tragic news, details about his life off the bike I find that my hunch that he was a kindred spirit was right. I didn't find out earlier that Don was an avid reader, that he was more than just interested in the environment, that he only used his television to watch DVDs.

The manner of Don's passing angers me. It seems such a pointless way to have lost a fellow randonneur, with the further sting of now losing the chance to get to know someone whose outlook and perspective and greater interests could have expanded my own. Being an RBA, one of my tasks is to review all the brevet cards turned in by the riders at the finish control. When ever I do this task, there is a certain joy to it supplied by finding common finish times. I see two or three or six or seven riders all with the same finish time, and I imagine them having ridden many miles together, swapping stories, taking pulls at the head of the paceline, just making the ride easier and better by being there too. In sharing this sad and tragic news today, those stories are being shared. Just like my time riding with Don, I've found that he was a reliable and steady wheel to follow on the SFR 600 back in late May. His fellow finishers also found him to be ideal company, and I imagine they got a boost from his upbeat outlook.

As I said, I'm angered by this. I will try, I will, to not think about how my own character may fall short of his example when a dark mood overtakes me. I did have the good fortune to have shared some time with Don doing something that we both found paid back a reward many times greater than the investment. Good bye Don, bonne route. You made an impression on many, you will be missed greatly by many. 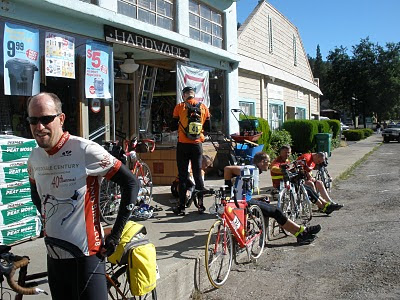 Where you left Don on the Gold Rush I pick up. We joined up at the outbound Grasshopper control and continued to ride together the rest of the route. We imagined bunny soldiers lining the road late at night and even thought we saw Big Foot.

He was a great guy to keep you company and would always lend a wheel.

On last years Davis 600k I was at the motel control with 90 miles to go. He was the next ride in and he ageed to ride the final long leg back to Davis with me to keep me awake.

After a couple of short nap breaks we finally made it but it was a tough one.

I'm glad I was able to spend time with him on quite a few brevets.

I think I am going to slow down and get to know more riders next year. You just never know when you last ride with them might be.

Anonymous said…
Rob,
Thanks for posting this. I'm not the writer you are and reading your post here is painful and heartwarming. Like many others, I'll miss Don May the spirits be with him.
Bruce Berg
November 17, 2010 at 8:17 PM

Alex Plumb said…
Rob,
Nicely said. Don epitomized the spirit of randonneuring. By example, he left me, and everyone he rode with, a better person.
Alex Plumb
November 18, 2010 at 9:47 AM

kk said…
Thank you, Rob. I have bookmarked this page to read and reread your wonderful description of Don's passion. Cycling was his favorite topic, he was in the process of building a new bike.
To all of you that have posted, thank you. Don truly loved his time spent with you.

Bill Bryant said…
Rob, I wanted to send you a note of thanks for a thoughtful blog entry.

I didn't know Don Mitchell well, only from when he passed through the Grasshopper rest stop at the 2009 GRR two times. Still, his sunny disposition stood out among the other riders, especially on the return when everyone--riders and volunteers alike--were noticeably tired and not at their best. Yet, somehow, Don seemed happy despite his fatigue. He also had a wry sense of humor that enlivened the little group under the awning, pensively eating their rations before resuming the long march back to Davis. I distinctly remember thinking to myself, "that's a great guy, and I'd like to ride with him some day. When the chips are down, he still has a good attitude."