March 01, 2014
Way early on a Wednesday morning on the first day of the new year, I'm waiting and shivering in a shopping center parking lot along with 47 other riders. We're all there to ride the Davis Bike Club's (DBC) First Chance 200km brevet which will take us from the western edge of Davis, itself on the western edge of the great Central Valley up through the Vaca Mountains over to Calistoga where we'll retrace our steps back to Davis. Earlier in December the Bay Area had experienced a longish stretch of really cold weather and on this day it seemed to have come back for a curtain call. Despite wool gloves under my cycling gloves my hands are painfully cold on the first few miles out. Out of the parking lot, the pace was very sedate and only gradually picked up. I had made my way up to the front of the first group and hung around there, sitting in comfortably (pace wise) with the group.

My very first ever brevet, save for a team event the prior year was a DBC 200km in March of 2005. The most enduring memory of that ride was how fast the lead group rode right from the start. I was quite green as far as how to ride those events then and I made the effort to try to stay with my riding friends who were determined to stick with that lead group. I just figured that was what you do so I better do that too. Dumb. Really dumb. 20 miles into the ride I was way overheated and way off the back of the pack, and on the return leg that day I really paid the price. This year on this brevet though, the pace was easier, or at least it seemed so. It could be that I had learned a thing or two and as a smarter rider it was easier. I sure wasn't as nervous as I was nearly nine years before. 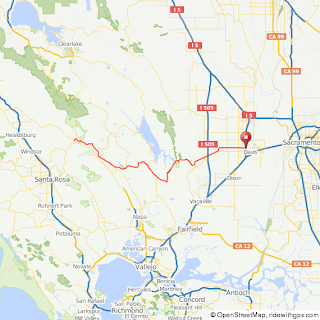 Around about the point where the route took us through the town of Winters, westbound, I checked back as we climbed an overpass over the Interstate and saw that groups were forming and this lead group had gapped the next group behind. I hung with Todd one or two riders from the front and we chatted and I tried not to think of how painful and immobile my fingers felt. Everything else was fine but I was quite disappointed in the performance of those wool gloves. An old joke from TV sitcoms and old movies has the guy decide to distract his friend from the pain of a bad tooth by stomping on his foot. To distract me from the pain in all my fingers, the fates decided to give me my first flat tire of 2014. I let Todd know that I needed to pull out of the pack and deal with the tire and he is immediately torn between sticking with me and helping me, and hanging with the pack. I let him off the hook immediately and we say our goodbyes because I know I'll *never* catch up with him and the group again.

I used the parking lot of the defunct 95 Food Mart (nee Pardesa Store) to work on the flat and it is quite some time before the next group of riders comes along. I quickly discover though that while I have a spare tube, it is the wrong tube for the tires I have and one I just can't use so I have to instead patch the hole in the tube that punctured. This takes time of course, longer than a simple tube change and amazingly the task allows my hands to warm. A lot of the passing riders don't even see me, but others call out a hello as they roll by. I never see Drew and Deb and only later do I find out that Drew has pipped me in the honors of first flat of the year, which explains why he doesn't roll by as I work on my own. Finally I'm on the road again and quickly catching small groups of riders. It was actually a fun way to get to ride with nearly everybody in the field that day as I would catch a group, chat for a bit and we'd compare notes on where other riders might be. Some of that info would turn out to be pretty off, but mostly it good intel.

I arrived at the turnaround point on the far side of Calistoga while most all the riders were still there. Todd and a few others were already headed back as I came in, but Peter and Russ were still there and agreed to wait a couple minutes more to allow me to roll off with them. The day never really warmed up like I had expected it to, but still this was the best part of the day in that regard. Later a haze would dull the blue sky but at this point it was still clear and we three chatted as we worked our way back to Highway 128 and the trip up past the various reservoirs in the area. Along the way we had caught up to another rider, Jamaica, but not far from the Nichelini Winery but Russ flatted and Jamaica rolled on by. Peter urged me to go catch up to Jamaica as he would stay with Russ so off I went, and it took quite some time before I did catch up. I was able to catch up just before the climb locally known as 'Cardiac'. While the climb itself is over a mile long and steep enough to get your attention it is not the hardest climb in the wider area. I was told though that it got it's name from the fact it appeared late in a race route when riders were particularly tired and spent. 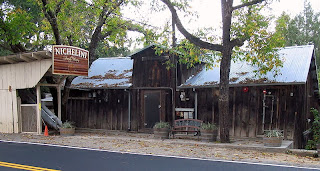 While we chatted we passed the Monticello Dam and dropped down through the rolling downhill terrain where the Vaca Mountains transition to the Central Valley. Along the way we passed Don who had taken a short break and was just getting back on the road. We three rolled along trading off leading the pace line until we neared Winters. Jamaica had fallen off at one point and I could not spot him behind us and at about that time we ended up picking up another rider who was completing his first brevet and longest ride ever. The sky had hazed over at this point and the chill had begun to return as the daylight was fading. With just 6 miles to go, I began to run out of steam and when I pushed harder, cramps would begin to take over my legs.

Our group arrived at the finish control at 16:10 so our elapsed time was just over 8 hours. My son was headed back to Sacramento for the upcoming semester and he and my wife met me for pizza as a post-ride meal. Hard to beat a fun day riding with friends topped off with some hot pizza and a beer.