Early repolarization, or, in other words, a change of plans

June 25, 2014
Yes, I admit, I'm way behind on entries for the K-hound series on this blog. I plan to catch up, and maybe even continue. About that maybe part. Well, there has been a change of plans forced on me. Here is the deal. In late May I rode a permanent on the 24th with a bunch of SFR club members. The next day I came down with a very bad cold that kept me from work a full week, and worse still, I then missed the SFR Dart (and a great opportunity to ride with Deb and Drew and Ken and Daryl), then I was still too sick to even volunteer, much less ride, the Santa Rosa 600km. Right there 800km of planned RUSA events missed and the clock ticks on.

Finally I get close to healthy again, and then the bottom really drops out. Last Saturday I went to volunteer for the Santa Rosa Terrible Two Double Century. My son and I have volunteered there every year since 2008, and I also volunteered in 2006, all at the Fort Ross rest stop, just across CA Highway One from the historic fort. This year we were all set up and the first riders had come and gone, and then I had a terrible pain in my lower abdomen, followed by nausea, profuse sweating and dizziness. Next thing I know my vision is closing down like the screen fades in silent movies and I'm on the ground surrounded by people, one of which is an EMT who is giving me a saline IV and is hooking me up to an EKG machine. I'm later told my BP dropped to 60 over 30 and I had no distal pulse (nothing in the wrists but of course a pulse in my neck). The EKG readouts alarm him and a med-evac helicopter is called in to transport me to a hospital with a heli-pad and Cardiac Center. Once at the hospital a 5th (at least) EKG test is done and the cardiologist reads it and sees this event for what it is. I have an abnormality in my heart that displays itself in an EKG as early repolarization. The condition apparently (after some Googling) is present in 1% of the population, and more commonly found in athletes (a group in which I do not feel I number) and is benign. 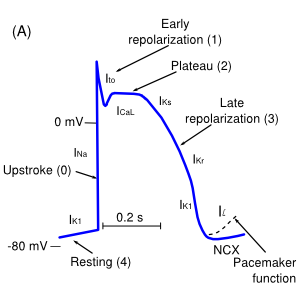 Nevertheless, there is still cause for close medical observation of the condition because I also have aortic valve regurgitation, but I've had that all my life. I was released about 2 hours after I got to the ER and was home by 8pm. Not surprisingly though, I just didn't feel like riding the SFR Lucas Valley Populaire on Sunday. Now I'm 900km short of my planned rides and a full month has disappeared from the calendar, and after tests and dr. appointments on Monday and Tuesday, I know I'll be missing another full month of riding when I have (minor) surgery to fix the source of the abdominal pain in August. I'll miss at least 900km before I get to the point of regaining the fitness I will lose during that layoff. Hopefully the stone I'll be pushing up hill toward the goal of the K-hound award will weigh less than 15 lbs, because that is what I'll be limited to in mid-August. Wait, I'll need to get a new and very lightweight bike for medical reasons!

The work toward clarifying the heart conditions is just beginning. I had an echo done today and tomorrow I'll get a Holter Monitor for a 24-hour EKG. I'm guessing I'll be cleared, but we still need to confirm that.

UPDATE: The Holter Monitor and Echocardiogram results have come back and all is clear. I've had a heart murmur all my life and that will continue to be monitored but is *not* an issue. I'll have an echo done every two years or so going forward, but there was no 'cardiac event' that happened. I'll have surgery to fix the abdominal issue, but not until August and until then I'm clear to ride.