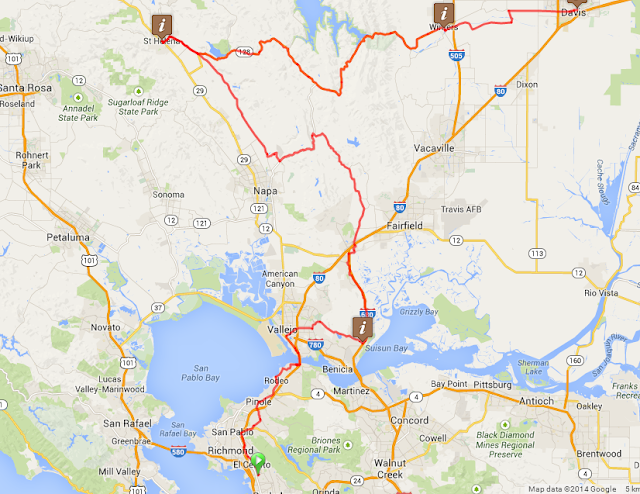 It is now April and I've managed to go more than three months without riding a permanent route. That is three months in Winter! The San Francisco Randonneurs and Santa Rosa Cyclists offered nearly a dozen different rides in those months, keeping me so busy I didn't need to ride a perm to get any RUSA events in. A while back Kirk had suggested a camping weekend up in Mendocino to ride a perm route along with a bunch of other friends. That never came to be, but we kept the idea of riding a perm together alive and in the end we settled on the one way route from El Cerrito to Davis via St. Helena and the Model Bakery,and a return via Amtrak. The route first began life as a DART route when The Davis Bike Club hosted their first ever DART event in November of 2012. The route morphed into a permanent route later that year and in the coming year it will be a brevet route, part of another SFR double brevet weekend (used mostly to help train up for PBP).

The route has some nice stretches, once it clears the residential sections of the East Bay and Vallejo, CA. Wooden Valley for one is a gorgeous stretch, and Napa Valley can be scenic. CA 128 from the Valley all the way to Winters, passing by Lake Berryessa is both challenging and a treat for the eyes. Food wise, the center piece is the Model Bakery in St. Helena. Fantastic pizza there, to be sure.

On April 12th, Kirk, Marisa, Barbara, Erik, Mark and myself met up at the Starbucks in El Cerrito and with a slightly late start we rolled off under cover of the marine layer of fog. Barbara and Mark both signed up just days before as RUSA members in order to participate. Mark took things at face value, but Barbara took most of the ride to convince her there was a point to these rides. At one point she and we too pretend we've done so. The group was a revolving array of riders with some riders rolling off in front, others tagging behind and then a reshuffle. The Bakery is met with enthusiasm and everyone found something on the menu that met their needs and after a long lunch we rolled off to tackle the more remote part of the ride.

Estimating what time our current pace would deliver us to Davis, I figured we'd miss the next to the last train and then need to wait around for a bit and not arrive home until 10pm or so. Barbara had other plans and the tougher part of the ride was tackled with more ease than anticipated, so much so that we had extra time to hang out at Berryessa Brewing Co. for a pint or two. Even with this stop our pace had quickened enough that we had just enough time to catch the early train after first grabbing some food in downtown Davis to take on the train.