February 18, 2010
The climate in the Bay Area has been described by some as boring, and lacking seasons. My initial response to that is a bit more forceful, but really it depends on your level of granularity when looking around you. This last week we've been treated with an intense taste of coming spring, and while the general pattern of how the day plays out is the same from day to day, it's really not the same day to day, not really at all.

This past weekend was a long weekend, and a few days before it arrived, the forecast included the 'R' word, but come Friday the forecast was pretty nice. Afternoons were clear, with a hint of being warmer than it had been for months. By Monday, a holiday for most of us, the pattern for the week emerged. Overnight the skies were largely clear, but just before dawn, fog would roll in off the bay and creep it's way up into the Berkeley and Oakland hills. By late morning, clear skies fought back and forced the fog back to the coastline and through the afternoon the air would warm up nicely.

I took advantage of this pattern by planning a ride with my son and a friend of mine out to Stinson Beach from The City, meeting our respective families for lunch, a little time walking the beach, and then my friend and I rode home, taking a very indirect way back to The City. Tuesday was a day of simple commuting straight to and from work, but Wednesday and Thursday, I took the long way. Each day the night sky would be clear as I went out to get the paper, and during the time it took to complete (or goof up) the sudoku puzzle, the fog would arrive. I'd leave the house just before the sun came up, riding into and out of fog banks. As I climbed up Spruce, I'd clear the fog. Today it took a bit more climbing and the edge of the fog was not nearly as distinct. Yesterday I left the fog behind early on the ride. Both days, I'd ride back into the fog as I came racing down Claremont. 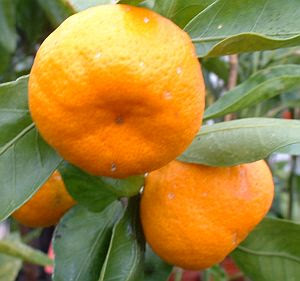 I've been trying to get a grip on the food I consume, and the reasons I consume so much of it, and after whittling down my vices one by one (long way to go still overall), I've managed to cut out a number of really bad food habits. I've managed to replace those with practices I hope will become habits, one of which relies on seasonal food. Around the produce markets near here, it is Satsuma orange time. Boy howdy, I just love those things. They are so easy to peel and so very tasty, and in my mind they are like candy. I crave them and can pop one after the other down the old pie hole. In too short a time though, they will be out of season. Right now, I'm folding this little fruit into as many emerging habits as I can. I've taken to keeping a few of these handy on my desk at work so I can eat them in the morning after my ride into work, and in the evening I take a walk after dinner at a brisk pace, and often end up at the local Natural Grocery store and pick up a few more.

As spring arrives, the source for my all time favorite treat will work it's way north. Right now, the strawberries are coming from near San Diego, but there are a great number of way more local strawberry farms and they will show up regularly at the farmer's markets and grocery stores. I'll find them well into the summer and touching into fall at the markets. Wish me luck as I try to keep to that habit and not retreat backward toward the $.25 sodas in the kitchen at work.

Joe B said…
I just had a nice chocolate croissant after my morning commute. I live by the motto that you can never eat too much, you can only exercise too little. Okay, that and avoid those doctor visits where they check your cholesterol.
February 19, 2010 at 8:50 AM

rob hawks said…
Confession time. One vice I haven't kicked, but for which I've found a somewhat convincing justification is a chocolate chip cookie from Semifreddies. The justification is that I only get them on my way to work when I've taken the long way, and therefore climbed 2000' on a 16 mile commute.
February 19, 2010 at 9:08 AM

Anonymous said…
You have really great taste on catch article titles, even when you are not interested in this topic you push to read it
February 19, 2010 at 12:55 PM

Dr Codfish said…
It's timely. Here comes the sun and I (like many) am not entirely thrilled with what it is illuminating.

I've been on my own version of "The Incredible Shrinking Randonneur" for the last few months and it is starting to have some measureable effect (I'm down 16 pounds this morning!)

Standard rules seem not to work for me:
1. I need to feel hungry, and to embrace that gnawing, uncomfortable sense of withdrawal not as a signal to eat, but as the sensation of loosing weight.

2. I need to stop eating before I am full. Because by the time I arrive at the sensation of fullness, I've eaten waaay too much. So my new mantra: Quit while you are still 'hungry for more'.

3. I'm gravitating teward a plant based menu. Michael Pollans idea: "If it came from a plant, eat it: If it was made in a plant, don't".