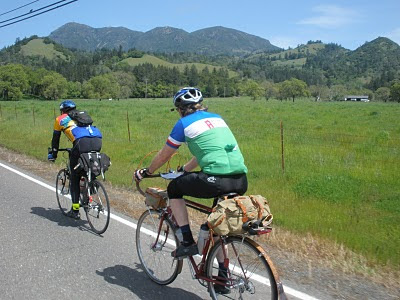 Back in 2002, I was invited to join a group of riders doing a multi-day ride from San Ramon, CA to Malibu, CA. The last day's ride would be the only day when the distance was under 100 miles for the day, and the full ride distance would be 440 miles. That ride was a blast and the first time I had done a multi-day ride in 14 years. On that trip I met a bunch of great people, had a lot great food, got to sit on the beach, drinking a Sierra Nevada Pale Ale while staring out on the Pacific with Morro Rock to the south, and had my socks knocked off by the gorgeous terrain that makes up Big Sur. I came home feeling the wonderful exhaustion that comes from a great trip, and by mid-week after returning to work, I could feel a strength on the bike that was an echo from younger days. That's the post-big-ride bounce, right there. That April ride ended up giving me a boost that lasted through the summer.

In the intervening years, my cycling seasons have been getting progressively fuller, including more miles and more big events. Some of those years have been minimized by respiratory maladies, and other year's I've been luckier, but not entirely lucky on that count. This year, I've had my fair share of colds, plus a little bit more, but mostly the colds have been minor and not as frequent as the worst years. I did have to miss the San Francisco Hopland 400km this year, and as a make up ride, I signed up for the Davis Bike Club's 400km. Earlier in the month I rode a fleche that covered roughly 230 miles. During the Fleche I felt wonderful, and the week after I felt pretty darn good, though I didn't have much chance to make use of that on the bike. Two weeks later came the DBC 400km.

This was the first time I've done any version of the Davis 400km, having done the Santa Rosa 400km as my first 400km, and two different versions of the San Francisco 400km (one of those versions twice). My first 400km remained the fastest one I'd done until this year. I did that first 400km somewhere around 19 hours. And then came the infamous SFR 400km through the Central Valley, in 2006. Ugh. 25-30+mph headwinds for six hours and a finish at 2:15 am. The other SFR 400kms used a different route, challenging in it's own way and finish times were just as late. On the DBC 400km though, there was next to no wind, headwind or otherwise, and far, far less climbing than on the current SFR 400 route, which has somewhere between 13,000 and 14,000 feet of elevation gain. 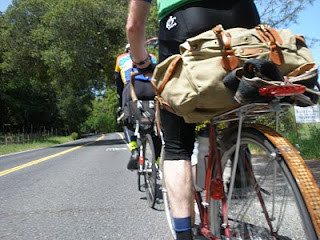 My friend Charlie gave me a ride up and back to the ride start/finish. His riding partner for the day did not show, so we decided to ride together after the first control. I had a small energy dip early in the ride, but the stop at the first control proved to be just the tonic I needed and from that point on, the ride was a joy all day long. From Davis, the route heads west, then south to Vacaville, then west again to Fairfield before cutting through the Vaca Mountains toward Napa Valley, with a stop in Calistoga, and then looping east and north of Healdsburg on the way toward Lake Sonoma. The return route is very similar, but is more direct on the leg toward Vacaville, and differs on the route between Vacaville and Davis.

This 400km felt so much more like the Fleche events I've done, riding with some of the same people for the full distance, never pushing to the max, leisurely stops at controls. The end result? My fastest time for a 400km, at 18:38 (I did finish toward the back of the pack, when usually I'm smack dab in the middle). This week, I've again felt that post-big-ride bounce, and this morning I finally overcame sloth and took the long way to work. I time the first portion of this route from home to the highest point, as a means of gauging my cycling fitness, and I've kept a record of the times. In looking at this year's chart I can see where I've had a cold coming on or where I'm just getting over one. On today's ride to work, I never pushed hard to the point where I couldn't sustain the pace, and the ride felt effortless compared to the first version back in January of this year.