The wanderings of Oblio's dog 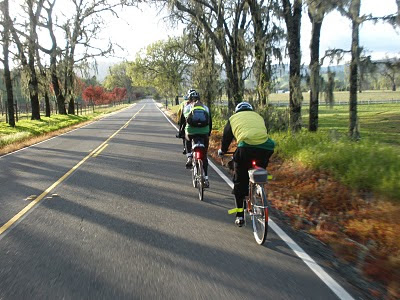 California has an extensive calendar of double century rides, and it was the double century that first lured me into long distance riding. Doing my first Davis Double Century in 2000, I was thrilled to be riding amongst hundreds of other riders. I still do several doubles a year now, but in 2002 many of my friends were 'graduating' to even longer rides. In 2003, these friends nearly disappeared from club rides with modest 100 mile distances. They were off riding something called 'brevets', basically qualifiers for a ride in Europe called Paris, Brest et retour. This cycling niche was known as randonneuring, based on the french word randonneur (the masculine form of the word for someone that commonly engages in hiking, but applied to cycling in a specific manner). By August, those friends had disappeared completely. They were all off in France doing a single ride of 770 miles, hopefully within the 90 hour time limit. All fall and into winter I heard countless stories of the PBP experience, and I was completely intrigued. In 2004, I decided to test myself as well when I signed up for a rather unique version of randonneuring known as a Flèche.

Flèche is the french word for arrow, and this choice of word to name the event comes into play if you imagine a target, with arrows flying toward the bulls-eye from all directions. The arrows represent the individual routes each Flèche team submits to the organizers, and the target is a central location with a specific meeting time where all the teams end up. The path the arrow follows in this case needs to be at least 360km, and the time of the 'flight' is no more than 24 hours and no less than 23 hours. The whole endeavor is said to derive from the efforts of several friends who on Easter weekend would travel the distance between Paris and St. Etienne, roughly 360 km, in order to meet up with other friends where they would share an Easter breakfast. The current organization of the Flèche has teams made up of riders on between three and five bicycles, and at least three team members need to finish the distance for the team to get credit for completing the ride. The team aspect is of course enormous, and plays heavily in guiding the make up of teams. At minimum, at least one team member knows all the other riders and more commonly, all team members are well acquainted. After all, the team will spend 24 hours in close company as they ride across the day and through the night aiming toward the finish target. 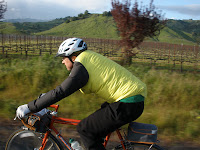 Now well into this posting, no doubt there is curiosity of just what the point is when the entry title mentions somebody's dog. Wondering about the point of this all is quite literally exactly where this tale is going. When a randonneuring club hosts a Flèche there are often enough teams that it is beginning to get difficult discerning one team from the next so the teams adopt names, quite often with the name being some word play on Flèche, or arrow. Aging children that grew up in the 1960s or 1970s may remember a movie by the name of 'The point!' which told the story of Oblio and Obio's faithful dog Arrow, and of course there you now have it.

On April 3rd, my team, known as Obio's dog, left Berkeley, California at 07:15 and over the next 24 hours we would travel through Hercules, Vallejo, Rockville, Fairfield, pass west of Winters and then head toward St. Helena, Calistoga, Healdsburg, Santa Rosa, Petaluma, Nicasio, Fairfax, Corte Madero, Sausalito, finally stopping at Crepes on Cole, south of the panhandle portion of Golden Gate Park in San Francisco. Our route was 233 miles long, gaining over 10,000' in elevation along the way. When we began, skies were overcast and temperatures were in the mid 40sF. By mid afternoon we had found sunny skies and sunshine fueled warmth had found us. Through the night, haze nearly obscured the moon and stars and temperatures slid into the upper 30s F, but the cold temps were offset by the disappearance of headwinds, a fair enough trade in my book.

Team chemistry, as alluded to above, is very important, and in our case one might wonder if it was alchemy as we ended up with gold. Bruce served as captain, and we used a route he would be riding for the third time. Phil joined us this year for his first ever Flèche, and Carlos and Robbins were riding their second (consecutive) Flèche. This would be my fourth and Bruce's fifth Flèche event. Randonneuring stories often become more compelling when the tale includes overcoming difficult conditions and circumstances. I'm afraid I will have to disappoint the reader on this point. We suffered no mechanicals, and except for a brief period (which certainly felt long to Phil) we all were feeling comfortable and confident of completing the route. As I said, I've done four of these events now, and darned if they just keep getting better each time.