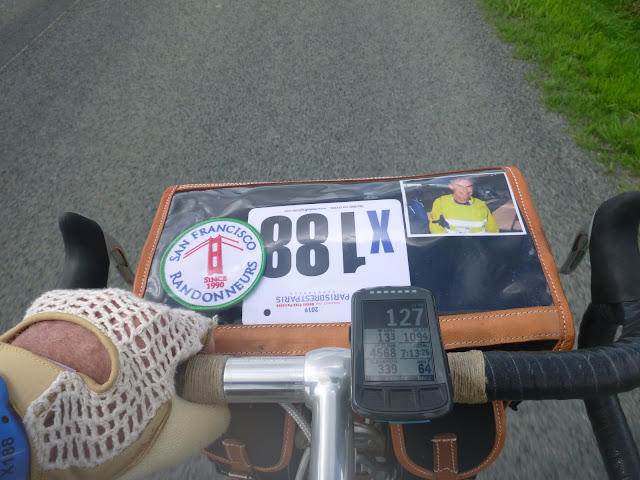 "I'm cured!". This was a posting I made within hours of having finished Paris, Brest, Paris 2015, hinting that it would be my last PBP. BS was officially called within seconds of that post hitting the interwebs, and this was not the first time that I was wrong (nor I suspect the last time I will be wrong). It is impossible to separate my experiences of riding PBP 2019 from any of those of past editions and the reader will have to forgive those moments of personal context that will follow below.

For the number of roadblocks I faced during the four year run-up to PBP 2019, as things transpired I led a somewhat charmed life once landing in France this past August. On the day before my flight, I received an email from Ed Felker inviting me to join Mary and him on a shake down ride out to Chartres. I had heard Craig Robertson describe the sight of the cathedral up on it's hill as he and Lori Cherry approached by bike from the west on a pre-PBP ride in 2015, and it immediately became a bucket list item for me and I had been wistfully thinking about wanting to do that ride just 24 hours before Ed's email hit my inbox. As logistical details about the trip were being ironed out in July, I got an offer to be picked up from the airport (the US travel agent had cancelled all plans for airport/hotel shuttles which were always on offer in the past).

Brian Koss drove out from SQY to pick me up the day I arrived (Brian, I'm not sure I can describe just how much I appreciated that gesture. It was huge!) and I had the afternoon on Wednesday then to assemble my bike. The next day, Brian, Anson, Roy and I met Ed and Mary as well as Jerry at their hotel for the ride to Chartres. The company was great, the distance and pace exactly what I needed to test the suspect Achilles tendon that halted all PBP training a month before. On the ride I found some rattles on the bike to chase down and Ed got a flat tire out of the way so neither of us had to deal with those issues on PBP itself. In the 'it is a small world' category, while we lunched in Chartres, Robert Chung stopped by to chat. I hadn't seen Robert in years, and when he came up to our table, seeing someone completely out of context left me literally speechless. 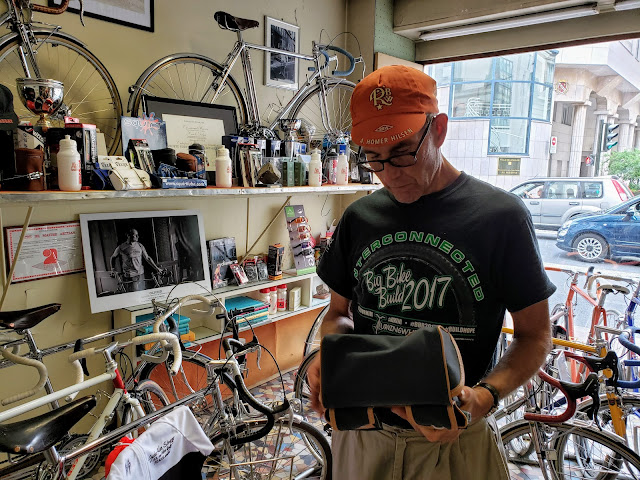 Over the next few days, other San Francisco Randonneurs showed up at the Campanile along with riders from elsewhere in the States and around the world. Groups would organize to go out for dinner each evening, and before that each day yet other groups would organize for day trips to one of maybe three destinations: Paris, Versailles, and Rambouillet. 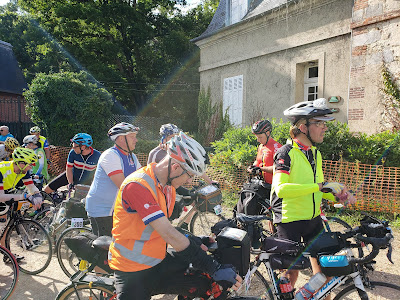 Passing time with bike people, talking about bikes, bike rides, bike injuries and bike clubs was the order of the days. Anson, Brian, Roy and I made the trip to Alex Singer Cycles on Friday, a place I had last visited in 2011 and got a replacement for the cycling cap I got back then that is now nearly in tatters. We ran into east coast randonneurs George Swain and Nigel Greene at the shop and it was good to see them after at least 4 years.

Saturday was transfer day for many of us and given the rain most opted to take the train from SQY (or Paris!) to Rambouillet. The turnstiles were overwhelmed and in the end the staff at the station just opened them up to let riders and bikes through. The route from the train station to our hotel was very short, but included a section of cobbles that a) were more like boulders and b) seemed to lack grout and the gaps between the wet rocks worried me. Sunday began wet, but cleared through the day and was warm and dry for the departure of both the 80 and 90 hour groups. Before heading over to watch those riders leave, some late shopping was done but really, there was little left in town to buy. What I collected to serve as a 4am breakfast for the next day was some sorry looking cheese, and a loaf of what was labeled as 'American' bread, which bore an unhealthy similarity to a Wonder Bread knock-off.

Sunday night I got just shy of my usual night's sleep of 7 hours and early in the morning I finished packing, checked out of the hotel and headed over to the start. I got there ahead of most of the 'X-men', those SFR members who signed up for the first wave of 84 hour riders. Finally we got our cards stamped, moved to a new location to stand and wait and then rolled out from Rambouillet into the dark roads through the forest. The initial pace seemed more on the sedate side for quite some time, but finally the pack got strung out as the route threaded through the first of so many small villages. Amidst all the shuffling in the dark I found Jerry Seager and we rode together for a while and then caught up to Ed and Mary on the tandem. I had simply not eaten enough that morning and for most of the daylight hours I was behind on nutrition and had the stomach issues one might expect.

The first step in reversing the bad stomach issues was stopping in Mortagne au Perche to eat. This was not a formal control, but at ~80 miles into the ride it might be the first place riders would stop to eat. The highest mountain I had to climb on the ride was not Roc'h Trevezel between Carhaix and Brest, instead it was the enormous plate of mashed potatoes I was given at this control. I can only say I did my best, but it was not good enough. Hoping to connect with Anson, Roy and others at this stop turned out to be in vain as they hit the counter at the front of the room and left without sitting down to eat. I rode off and on with Jerry, Mary, Ed, Sourav and others until the first real control in Villaines, which is my personal favorite. Along the way, Sourav admitted to being overwhelmed with culture shock. I had no help to offer, and there was no PBP Tips installment on that aspect of riding PBP.

The control stop in Fougeres brought a sighting of RUSA #s 7 and 8, Bill and Lois, and another chance to stem the tide of a bad stomach. Alas, no frites on offer but I did eat heartily and was beginning to win the battle. The memory begins to blur, but I think it was between Fougeres and Tinteniac outbound that our group hit some rain, dashing my hopes of a rain free PBP on the 4th try. In Tinteniac, I was greeted by Jean-Michel who had taken my photo there on PBP 2011 and posted it on Facebook where someone found it and forwarded to me. He had invited me to stop at his house to eat, rest, shower perhaps but organizing the group I was riding with was difficult. Instead, he bought me a baguette with cheese and a little red ambulance with which to wash down the sandwich. I was enjoying food completely at this point and it was good to finally meet Jean-Michel in person. He had hosted at his house a group of 90 hour riders earlier in the day. I was touched by his generosity toward me and to a number of other riders passing through his town. It is these connections to the residents of the towns PBP passes through that make the experience so great.

I had been silently dreading the section between Tinteniac and Loudeac, largely because how my stomach had put me on the defensive so to speak. I knew that stretch to be long, seemingly endless and at night largely featureless. My charmed life, stomach notwithstanding, continued though because I had the wheel of the tandem to myself and Ed and Mary were killing it on that segment. This fine run helped put all three of us back in the game. I had hoped to arrive in Loudeac around 1:30am but had also hoped to leave Tinteniac before sunset in order to do that. It was dark before we had reached that previous control. My arrival time in Loudeac fell between my two previous PBP rides. Less sleep than I wanted, but more than I had in 2011 I think. First food shoved through the pie-hole, then sleep.