Unlike the fog that descended on the landscape overnight on Monday, the fog forming on Thursday morning was mental. But the chill was real. One downside to leaving Mortagne is that so much of the early terrain is down hill, and the coldest part of night was taking hold on that terrain for both the 84 hour riders and many if not most of the 90 hour riders. In the dark, it seemed that so few riders had gotten on the road, but as the kilometers clicked off the frequency of passing riders increased and packs were again forming, and as the sky lightened there was again a steady stream of red tail lights ahead. Foggy headed and chilled by early morning air that was nudging 40F, many riders reacted with indecision when navigational decisions were to be made and a simple left turn on the route that wasn't within a village caught 95% of the riders and large groups would have to navigate a u-turn amid the chaotic scene.

At long last, the undulating landscape smoothed out on this segment and just when I could begin to raise my pace and keep it there, my front tire began to get soft. The slowness of the leak allowed me to quickly jump ahead and tell Roy and Anson that I was dropping off to fix the tire and that they didn't have to wait for me. I found a spot on the opposite side of the road where I could pull off and be out of PBP traffic. No sooner had I stopped and pulled out my repair gear than another rider pulled over next to me, but not to fix a flat. He proceeded to drop his bike, plop down and lower his head while sitting up. When I fix a flat tire, I like to find what caused the leak so I don't put in a new tube that just gets pierced by the wire or glass that remains in the casing and to do that I inflate the punctured tube and listen for the leak. It had quickly become impossible to hear any leak. The rider next to me was snoring so loudly I wondered if the occupants of the house across the street would come out to complain. The instant I finished my task was the same instant the other rider woke up and jumped back on his bike.

Once back on the road I was able to raise my cruising speed and keep it there. There no longer were any hills, big, small, short or long that would break up my pace and I was catching and passing many of the riders that had passed me as I was fixing the flat. Only a very few riders I passed were doing more than staring ahead and pedaling. Stacey K. and another rider were engaged in an animated conversation that was recapping their ride up to this point. I pushed on, knowing my own tale was not yet complete.

As the next control at Dreux neared I was surprised to see I had caught Anson and we rolled into the bike corral together with plans to roll out together after eating. After getting my card stamped I went in search of a sink to wash my hands before eating. I was directed to the women's locker room at the sports facility that hosted the control and before I could rinse my hands and face there was pounding from the door behind me. A rider from Japan had become locked inside the WC when the door handle just would not work. Back out in the cafeteria area I found the Boyz on the Hoods roaming free, just finishing up their breakfast, and I heard several stories about the Human Exclamation Point, and the World's Weirdest AirBnB rooms. Fatigue may have made it hard to see this on their faces, but everyone was energized by the prospect of a mere 25 or so more miles til the finish of the route. 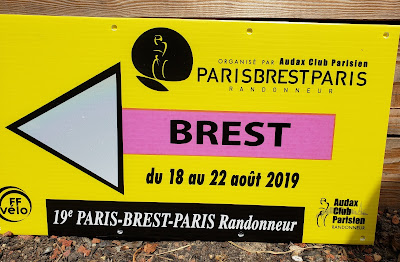 For the second time on this edition, but for the first time over all the kilometers I've ridden on PBP (including 2007) I was sent off route when someone has vandalized the route signs. Those signs were placed everywhere on the route and had allowed me to never once need to consult a cue sheet, map or even a gps device, but here someone had stolen the signs at a crucial spot. At the 11th hour before the start a route change had been issued, and at the very spot where the new route would diverge from the old route, the signs with reflective arrows were missing. This sent riders in several directions, some with 100% certainty they knew the way (they were wrong) and some others with far less certainly actually picking the correct route. Our own quandary was solved by course officials arriving on motos with new signs to install, and hand gestures about which way to get going!

We are all weary, and the full sun of mid-morning can only generate half-hearted conversations when normally the full body would be awakened and the mind bursting to retell all the things seen, heard and done. I know only so much of this route from Dreux to the finish because the new start town plus the last minute re-route have mixed things up. The crisp, clear weather has had some beneficial effects. The first small town on the route after Dreux was normally one that stimulated senses other than sight, sound and touch, and on this day it did not have an agricultural smell to it. Halfway along to the finish, I let Anson and Roy gap me. I'm fine at this point, but wanted a little space around me and a clearer view ahead. I know they are only a minute or two ahead and I'm rolling well. Past the fields already cleared of crops, the route entered the Forêt Domaniale de Rambouillet and trees cut off all views. One last village in the middle of the forest to clear and we were on the final run into Rambouillet and the finish. After such wonderful roads we had to negotiate a few sections of enormous cobbles, then wend our way toward the back of the property to reach the actual finish and the final chip reader that would mark the end of PBP 2019.

My first few steps off the bike made me wonder if I still knew how to walk. The day was getting hot and the chaos of the finish control grounds made the job of reaching the control tent so much harder. I found my way in and began the ceremony that most riders have imagined more than once over the last few days. Despite all the hubbub going on outside, the line to get cards stamped was quite short and moving quickly.  No words were exchanged in the transaction here, but deep meaning and understanding was conveyed. After carefully marking my card with the time and day, and stamping the final control box the control official stood up, gently put my finishers medal around my neck, looked directly into my eyes and shook my hand. There was no doubt he knew what it took for me to be standing in front of him right then. 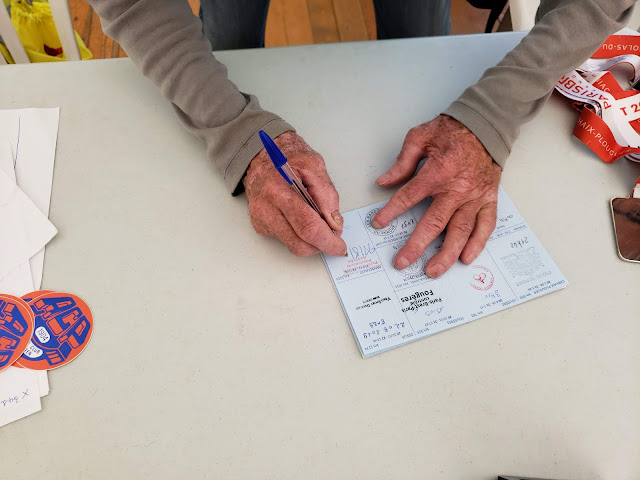 Despite how wrecked I was, what will make the finish of this PBP so special was having Bryan Kilgore greet me at the finish, Theresa L. calling out to me as I crossed the final timer, Deb Banks giving me a huge hug as I got off my bike, and seeing all the Boyz on the Hoods soaking up the full experience of now being an ancien.

March 19, 2022
There are only two routes that SFR currently uses that stretch back to our first year (1999) as a RUSA region, and of those two (Mendocino Coast (formerly Fort Bragg) 600 and Healdsburg 300) only the Healdsburg 300km has been held every year SFR has held brevets. History First run in 1999, this route and all SFR events, took a break while the region was inactive from 2000 through 2002. Once an active region again in 2003, this 300km route has then been held every year since, now through 2022 and SFR has hosted 21 iterations of the Healdsburg 300km. The name for this early season 300km was once the Russian River 300km. Other SFR routes have been named for the point furthest from the start, for example the Hopland 400km so following that convention, many SFR members, past and present refered to this route as the Healdsburg 300 and that is how it now appears in both the RUSA database and SFR website. Another problem with the old 'Russian River' name is that it wasn't unique
Post a Comment
Read more