October 13, 2009
The Bay Area pretty much has only two seasons, each with plenty of variations, but it's really just the Rainy Season and the rest of the year. The rainy season by most estimations begins on November 1st and depending on who is defining it, runs through the end of January or sometime in April. Today's storm is therefore just a bit early.

Sometime overnight, the rain from this storm began and we can usually tell the nature of the storm by which window the rain splats against. This storm has wind and rain coming from the south-southeast and it seemed pretty mild then given the weather alerts. I got a late start out the door on my commute to work, and riding though my neighborhood the storm didn't seem all that bad. Lots of twigs and leaves on the roadways, but otherwise not much. However, as I made my way south toward Emeryville, the wind and rain began to intensify. My preferred route takes me along the Bay Trail and around the west side of Golden Gate Fields race track on Flemming Point, where the pavement runs right up to the bay shore. Climbing the hill that connects the two parking lots, I got hit full on with the rising wind and I watched with amusement as the rainwater runoff was pushing fairly large sized gravel down hill. 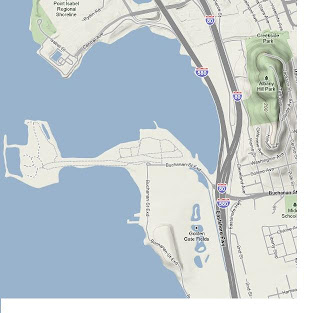 While there were no other cyclists on the trail, I could tell that car traffic on the adjacent Interstate was a bit higher than usual. Crossing the Berkeley Bike Bridge with the wind rising even more, I got to feel the wind as a tail wind, though only briefly, as I rolled down the east ramp into Aquatic Park. The park is in fairly low laying terrain and with major storms the east side multi-use path is often underwater in several places. Flooding like that often causes egrets, great and little, to congregate and loiter on the grassy areas nearer to the train tracks, and I scared a flock into flight as I made my way south toward Shellmound.

My daily route takes me along one of Emeryville's Bicycle Boulevards, mine being the Horton Street boulevard and all the buildings built in the last decade provide shelter from the wind. Upon arriving at work, that is when the winds really picked up and the sound on the metal roof of our saw-toothed building is amplified, making the storm seem more intense. On my ride in I had a warm shower, dry clothes and a bowl of hot oatmeal to look forward to, and for my ride home I look forward to a hefty tailwind.