January 08, 2010
I was listening to some old broadcasts of This American Life recently and in one act of one of the episodes the correspondents from Planet Money (producers of a fabulous piece on the causes of the recession) interview an economic forecaster. Economic forecasting relies heavily on the output from the Bureau of Economic Analysis, which issues not a set of results from previous fiscal quarters, but instead a three year series of estimates, each estimate revised since the previous one. In fact, results of what happened economically in this country back in the 1920s is still being revised today! Given that, I really don't feel quite so bad in waiting until January 8th to review my previous riding year.

A lot of people think reflecting on the last year is arbitrary in the segment of time being reviewed. Maybe so. I don't think it is so unreasonable really. Our year is a close but not exact measurement of the length of time it takes to travel once around the sun, one trip through all the seasons of a year. We re-adjust the tally when we have to and slip that re-adjustment into a part of the calendar where someone thought the rest of us might not mind so much. A lot of people, maybe some of the same people, don't think mileage is the best way to assess a riding year but it does provide starting place, and maybe it being a start and not an end to review makes it more palatable. In any case, here is the short form of the Executive Summary of last year: 8701 miles ridden. 8701 miles is not the most I've ridden in a year, nor is it the least, nor is it average. It is more than last year. My goal is to make it less than this year. I must admit something. Like the Bureau of Economic Analysis, I will likely be publishing a revision of that figure. I spent a couple hours last night updating my database, and doing some digging to find all the rides I forgot to record. I know there are some rides that are missing, and I'm pretty sure that what is there is honest and accurate, so the number is likely to go up once I finish searching. 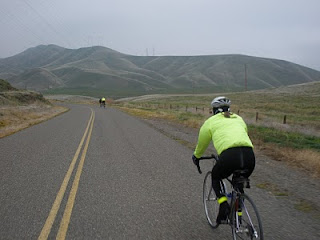 Behind the number, in this case the number 8,701, are many details and memories. As 2008 came to a close and 2009 began, I really was not all that enthused about cycling. I still attempted to do the rides I had always done at that time of year, but without the preparation and foundation work, and as a result I struggled. I've no idea exactly what it was or exactly when it happened, but something fell solidly into place and I woke up from a cycling slumber. I was keen to plan rides again, keen to do them, and keen to photograph them and complete write ups. I followed through on this blog after a long layoff too. My intent was to document my thoughts on and memories of PBP 2007 and my preparation for PBP 2011. I did get a few write ups on the blog, but mainly I was pretty busy doing rides, paperwork for the San Francisco Randonneurs, and preparing for the next ride. Once in a while I would post updates on my progress on the RUSA R-12 award, but lately I sort of missed out on a few entries.

Below, I'll try to give a few thumbnail sketches of some of these rides, and perhaps do better in the near future with updating the blog on time.

So there you go, a few of the rides that concluded 2009 and totalled 8,701 miles. Unlike last year at this time, I am now pretty excited about the possibilities of the coming year on the bike. I made a resolution that I'd ride more miles in 2010, but the reason behind those more miles was to ride more with riders I've never ridden with, and more with riders I haven't ridden with in way too long, and none of it would come at the expense of equaling the miles I rode with friends in 2009. Here's to 2010.