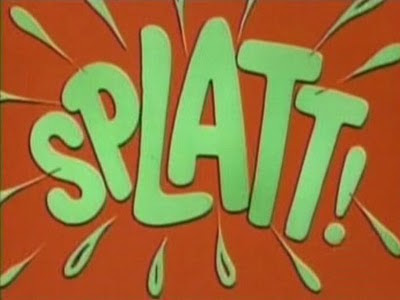 JRA. (AKA Just Riding Along). That was me last Thursday after leaving work. One minute I'm riding along on may way to complete an errand, and the next minute I'm finishing up a close inspection of the pavement on Stanford Ave., just east of Market. This change in status was unplanned, and a huge surprise to me. Right in the middle of this event I do recall thinking "I'm not going to like how this turns out". Sometimes I am just soooo right. I didn't like how it turned out at all.

I know full well that a 53 year old body really doesn't do well in these circumstances, and I did a 10 count before I got up, first making sure that there were no serious alarm bells going off. I was able to sit up, and very shakily stand up, but walking was not going right. One big problem was that there was something on the bottom of my shoe. Turns out that only 99% of my bike was a couple yards away. The other 1% in the form of a pedal and a 2 inch long segment of the right crank arm was still locked to my shoe. I went and sat on the wet curb in the light drizzle and tried to take stock. As soon as I sat down, a man with a very concerned expression came up and asked if I was ok. Best I could say was that I thought I was going to be, eventually. 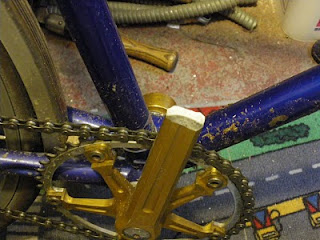 So my circumstances were these: My crank arm had snapped off clean and I tumbled to my right, taking the bike with me. I think I landed first, flipping the bike over and then I rolled. I have bruises in odd places now, and those places were not the first ones to report in as damaged. As I answered the questions of the gentleman who stopped to help, another driver pulled up with his truck and immediately offered to take me where I needed to go as soon as I knew what that might be. Nothing was broken on my body, and I only had a small cut on my knee. The rest were minor abrasions and bruises, most of which I wouldn't know about until the next morning. I thanked both men for helping out, and then got a lift to the nearest BART station, called my wife to tell her I needed to be picked up, and in 30 minutes I was home. 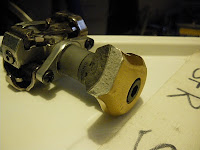 Judging from the markings, it looks like that crack existed for quite some time. The light area is the portion of the crank that failed thursday, the dark section suggests to me a portion of the crank that was cracked or flawed in the casting from the start. The cranks were vintage Campy NR cranks, with gold anodizing. They had very few miles on them, in terms of a life span of a set of cranks. I estimate between 3,000 and 5,000 miles. There was no visible damage to the cranks so the crack was not begun by some other impact.

I did ride to work the next day, and the ride helped alleviate the soreness and stiffness I felt first thing in the morning. I was sure to ride slowly, turning small gears (on a different bike). Big cogs, and little rings all the way to and from work. I did not get on a bike all weekend, and there was a long time saturday when the rain took a break so I could have slipped a ride in. I've got more rides planned soon so I'll catch up on the mileage.

Sorry to hear about that - I heard second-hand that you'd tumbled, but didn't get the whole story until I read this.

I've had a couple of broken cranks, one that put me down immediately, and the other that for some reason didn't. It's scary stuff.

Joe said…
Wow Rob! Glad to hear you're okay! I know how bad unexpected tumbles to the pavement can be and in this case, you wouldn't have even seen that coming. I love the line about this not going to be good. For me, it was "this is going to hurt." Take care of yourself and please buy a reliable crank!

systemBuilder said…
If you look at the break, half of it is dirty, which means that the crank was half gone FOR A LONG TIME before it finally snapped, all at once, at the white boundary. INSPECT YOUR CRANKS for HAIRLINE CRACKS, CAMPY ONES ARE BRITTLE (7075, I think) !!
January 26, 2010 at 2:05 PM

Eric Keller said…
classic fatigue crack. It initiated in the circular area of the dark region. The actual initiation site was quite small, probably a machining mark. It's possible you could find the actual site by eye. This took a very long time to propagate across the crank. The silver area is the part that broke all at once. You can see just before that there is a silvery line in the dark region. I'm guessing that is wear from many pedal strokes. So the crank was bending a little and wearing down the fracture surface.
January 26, 2010 at 4:19 PM

Eric Keller said…
and I forgot to add, glad to hear you are ok. I'm riding some vintage Campagnolo cranks and I need to look at them again.
January 27, 2010 at 10:25 AM

rob hawks said…
Thanks everyone for your well wishes. Recover proceeds, though I've discovered new bruises I didn't see for days! I've commuted by bike every day, but skipped any riding on the weekend (though the spirit was willing). The biggest problem is my right knee, which aches when I sit at my desk, but seems fine when I ride. Guess I better get around to riding then.
January 27, 2010 at 10:30 AM

Dr Codfish said…
Thanks for giving up your boby to demonstrate a point I made in an article I recently wrote (you will see it soon). Someone had to do it and I appreciate you 'taking the fall' for the rest of us.

Unexpected stuff happens and because it is unexpected we don't generally do the close up inspections necessary to detect/prevent it. In this, the pre-PBP year I prescribe a meticulous wash down of the velo, followed up with a very close up (Crackerjack magnifing glass?) inspection to suss out the tell tale signs of 'unexpected' problems.

So happy you came through in relatively good shape!