Back to the start 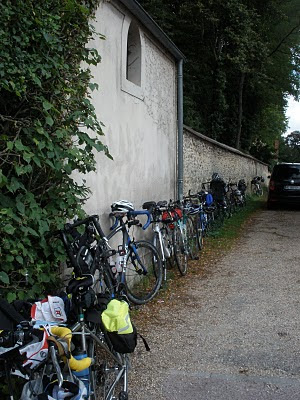 There is wonder and excitement upon experiencing something for the first time. Memories are laid down, and in later years called back up again in the telling of a tale. Even so, approaching something with the benefit of experience, and a measure of focused preparation can often times make the return seem like a new experience itself. I learned this so well this past August when the four year wait concluded and the 17th edition of Paris, Brest et retour was about to begin.

Starting in August of 2007 while still in France, and continuing and building over the next four years I prepared myself in the best way I knew how, and in what ever ways I could for PBP 2011. I left France four years ago struggling a bit to be positive about the experience of PBP 2007, and four years seemed too much like an eternity. In so many ways I had a fantastic experience back then, no doubt about that, but those experiences were also at war with the emotions of having fallen short. True also was the realization that I had made mistakes in my approach to the challenge. Some of those realizations would take a long time to develop however, because I didn't recognize them at the time as mistakes, not for some time anyway.

It is obvious of course that if one wants to successfully complete a long ride, then riding frequently and riding continuously would be part of the preparation. This blog has many write ups of long rides so I won't recount those here. If a short list of the other aspects of preparation for completing PBP is needed, here goes: Learn French, solve nutritional issues, mitigate sleeping issues, learn to be self dependent on the bike. Learning French is obvious, right? The more I could understand signage, directions, conversations, the better off I'd be. I have trouble learning a language because of my difficulty in hearing the language. The more I could hear it though, and learn the cadence, the better I'd understand just what was going on. To address this, I took once-a-week classes at the local Alliance Francaise. This would actually help address an aspect of the last point on the list above, but more about that in later installments. Solving nutritional issues and mitigating sleep issues were both chemically assisted in part, but not entirely. One huge mistake I made in 2007 was in the eating department. Despite the offerings at all the controls, I tried to only eat from the stash I brought with me, thinking that I couldn't tolerate or just didn't like what was offered at the control restaurants. To put a finer point on the nutritional mistake, I approached PBP with no plan there at all. To fix this however, it is a difficult task at best to change one's eating tastes, so the easier way to go is to identify the overlap between what you do like and what is offered, and go for that in a big way.

Sleep is a huge aspect to address when preparing for any brevet 600km or longer. At this point, I pretty much have all the data I need to know that I do better when I start a long brevet shortly after a night's sleep. I went back and forth on the decision to start the 90 hour group or the 84 hour group. My hesitation was largely that I didn't think I was fast enough to finish in 84 hours. The morning start was very attractive, but did I have the speed for this? My decision was finally made to take the 84 hour start *only* because of the morning start. I would have felt better about this choice if I had been riding better all year prior to PBP, but that didn't come to be. July, the final full month for preparation, turned out to be mostly ok, but mixed in that I had plenty of miles, and I had some really good rides where I felt my form really taking shape. I also had at least one clunker of a ride on the double brevet weekend and actually had to DNF on the first day by stopping after 200km at the overnight location instead of doing the full 300km for that day. In the end I put my money on being well rested before the start, remembering the 90 hour evening start in 2007 where napping mid day proved impossible and only frustrated me more than relaxed me. The final piece of this four part puzzle? Learning to be self dependent. What does this mean? Ah, for me, it meant being more content on my own and never letting the inability to keep up to someone else be discouraging. I've always been able to handle any mechanical issue that might crop up. Flat tires were absolutely no problem, I've fixed those hundreds of times over the many years I've ridden. Through the years I've weeded out certain types of parts and certain practices in maintaining my bike and what remains is well beyond reliable. I know my bikes well and that certainly helps in getting to the finish of a ride. So it is not the physical here, rather it is the mental part of being self dependent. Some riders do well when left to ride a long brevet on their own through the night or into the next day. There are some that even seek that out. I was never one of those riders and always just preferred to be with others. When I tried to ride several different 1200km rides, and found myself dropped and on my own early, it affected me and while I won't say it was a factor in not finishing those rides, it didn't do me any good. Since 2007 though this slowly changed. The old saying is that nothing breeds success like success, and becoming the faster rider in the groups I rode in before bred that success. Now I can simply back off, pace other riders and in the end the rides become better for me when I finish not feeling all trashed.

Of all these aspects to getting ready, it is this last one that played the biggest role, engulfing and overshadowing all the others, and the realization of this was profound.

Bill Watts said…
I have really enjoyed reading your account of PBP. It's great how you used the experience of 2007 to learn to improve going into 2011. And your time for 2011 is really impressive. Congratulations to you!
October 10, 2011 at 2:58 PM

rob hawks said…
Thanks Bill. Hopefully I'll get more of the write-up committed to electrons soon.
December 1, 2011 at 10:19 AM