The journey is more than the road upon which I traveled 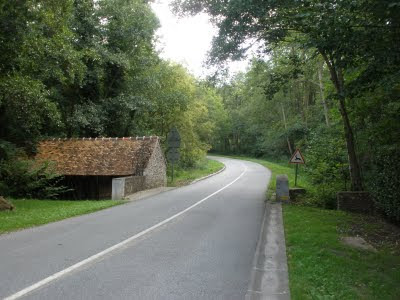 Shortly after addressing the more urgent unpacking details upon returning from PBP 2011, having found an unanticipated moment of quiet I settled in front of the computer and sifted through the early messages from my fellow travelers, and also quite a number of congratulatory postings from friends who had followed the event electronically. I was not the first to upload my photos from the ride and post them so many of these messages had links to albums or even specific single photos. One such post on a social network contained a photo taken by a then unknown to me photographer, of me on the bike at mid day, with much more than a hint of a smile on my face. It took me several viewings before I could place the image within my memories of any of the 1230 kilometers of the course. With some context now supplied, I set to work trying to recall the circumstances surrounding me at the time, such as what I was thinking when the photo was taken. That really wasn't a hard task at all. Though many kilometers remained before the finish, I knew I was thinking, not at all for the first time, that I would finish. 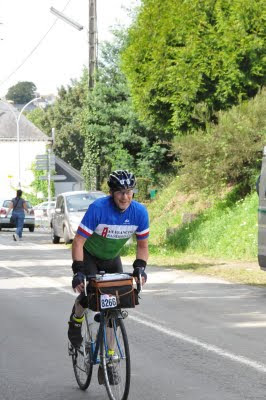 All I needed to do was imagine crossing the finish line, and if I could stop there, a huge smile would form on my face. More often though, I'd just burst out in laughter. Two weeks later, just thinking about that concluding moment, that beep from the recording mat, and that smile is there in an instant.

This photo of me as I near the Tinténiac control on the return route turns out to mean a great deal to me. The meaning is two-fold as well. It is clear (to me at any rate) that the photo captures me absolutely enjoying the moment, and enjoying it as completely as I can. With hindsight from two weeks later, though, I know now what that rider in the photo could not: the best was still to come. Imagine then, enjoying something so thoroughly, and then the experience just gets better.

If you have read the notes that describe this blog, you then know that this was not my first attempt at PBP. In 2007, I fell a long way short of finishing. For the following four years, nearly everything I did cycling related was to prepare for a return to France and to take another shot at Paris, Brest et retour. While falling short of obsessive, my preparation was many faceted, and only grew in determination as the four years passed. I felt I was addressing all the shortcomings of the attempt in 2007. I felt by 2011 I was a better randonneur than in 2007. I believed I knew what I wanted to achieve and I felt I had learned how to achieve that. The second meaning that the photo gives to me though is that despite all my preparation and the strong convictions that gave me, I simply had no real idea what finishing this time would mean to me. Finding out just what finishing did mean to me turned out to be stunning.

In my posts on this blog, I try to move beyond a recitation of riding stats and grocery lists of what I ate. Given that, some of my posts get lengthy and by some standards verbose. Paris, Brest, Paris is just not a one-post-experience, so I plan to deliver the story in segments over time (mostly as I finish them), and this post is then a preface. PBP is also not the sum of the route itself and for me the ride began long before that pre-dawn start on August 22nd and did not end at mid-day on August 25th.